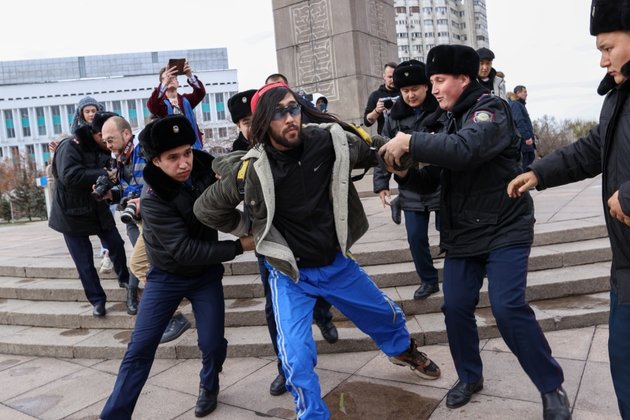 ALMATY, Kazakhstan -- The first election in Kazakhstan since more than 200 people were killed during the worst political unrest since independence produced a thoroughly unsurprising outcome.

Incumbent president Qasym-Zhomart Toqaev cruised to a landslide win with more than 80 percent of the vote, leaving five low-profile contestants trailing in his wake.

But what else did we learn from the snap ballot that cemented the 69-year-old career diplomat's status as ultimate decision-maker?

Nominated by various political parties and public associations, they shied away from directly criticizing the race favorite and in some cases even spoke in favor of Toqaev's policies.

They did, however, demonstrate their talent for milking and shoeing horses during an otherwise colorless election campaign.

In a preelection interview with RFE/RL's Kazakh Service, political scientist Dosym Satpaev called this clause "a filter" introduced by first President Nursultan Nazarbaev "to control the electoral process and its participants."

That it remains in force raises questions about Toqaev's claims of a "New Kazakhstan,' a slogan the head of state has championed after sidelining Nazarbaev's powerful clan following the unrest in January, Satpaev argued.

Despite authorities' protests to the contrary, it is clear that Kazakhstan still views freedom of assembly with suspicion.

The build-up to the vote was marked by preventative arrests targeting political activists who were planning election day demonstrations, with at least six sentenced to administrative detention of up to 15 days.

Kazakhstan's state prosecutor had warned citizens of legal consequences for holding rallies after regime nemesis Mukhtar Ablyazov, an opposition leader living in self-exile, called for the "peaceful" overthrow of Toqaev.

Activists from one group, Oyan Qazaqstan, were detained on election day by police almost as soon as they had unfurled a banner at a square where peaceful protesters were fired on by government troops at the beginning of this year. Those activists were released later in the day.

Kazakhstan's government argues that police only shut down unsanctioned protests, and that, thanks to a law passed in 2020, protest organizers need only notify authorities about their intent to hold demonstrations in advance.

But many who have tried to do just that have found their efforts blocked on various official pretexts, justifying the view of Human Rights Watch that the new law "barely shifts the status quo."

Former President Nazarbaev has made few public appearances since the January events, which saw the 82-year-old's relatives shed powerful and lucrative positions as an elite schism was laid bare.

There were even rumors that members of Nazarbaev's family had tried to overthrow the man he handpicked as his successor in 2019, Toqaev, during the chaos that began with peaceful protests against a fuel price hike.

To date the only high profile Nazarbaev ally jailed in connection with the violence is Karim Massimov, a long-time lieutenant in the state bureaucracy who headed the security services at the time anti-government protests spread.

Casting his vote at a state opera house in the capital, Astana, Nazarbaev responded to questions about Massimov's ongoing, closed-doors trial with a Christian analogy.

"Massimov worked for many years with me, but how would you know? Did Jesus Christ know about Judas, who sat close to him?"

Nazarbaev's comparison was unfortunate, as many on social media pointed out, since according to the Bible Jesus both predicted his disciple's betrayal and did nothing to prevent it.

The last presidential election in 2019 led to a surge in interest in vote monitoring among youth, a phenomenon that authorities apparently failed to foresee, as a rash of alleged electoral violations helped fuel protests against the vote that handed Toqaev the presidency.

This time around, more than a dozen independent monitors were ejected from polling stations, with police doing the heavy lifting in some cases.

Local monitoring groups also complained of pressure before the poll.

A group called Independent Monitors told RFE/RL that its plans to hold a training session on the eve of the ballot were scuppered at the last minute when the management of the hotel where they were going to hold the training informed them that the venue had been flooded.

Earlier in the week, the organization's Almaty office suffered an extended power cut that other offices in the same building somehow managed to avoid.

Monitors will face fresh restrictions next year, when parliamentary elections are expected to be held, thanks to legislative tweaks raising the barriers for accreditation that will enter force on January 1.

Toqaev has promised that the term he was competing for on November 20 will be his last and that future presidents will be limited to a single term in line with recent constitutional changes.

Kazakh President Qasym-Zhomart Toqaev walks out of a voting booth in Astana before casting his ballot on November 20.

But there is a catch -- presidential terms are now a whopping seven years long, the same grace period granted to top decision-makers in democracy-free locales such as Equatorial Guinea, Syria, and Turkmenistan, to name a few.

And even if the president keeps his promise never to run again, he is unlikely to want somebody who is not loyal to him to take the reins in 2029.

That uncertainty sets the stage for another managed transition of power in Kazakhstan, which was not managed so well the last time.