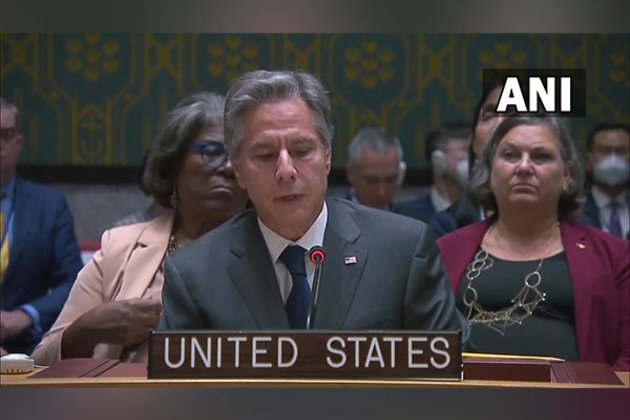 By Reena BhardwajNew York [US], September 22 (ANI): US Secretary of State Antony Blinken ramped up criticism of Russia for its war in Ukraine on Thursday and noted that countries including those maintaining "close ties" with Moscow, have publicly condemned the conflict.

Addressing the UN Security Council meeting on Ukraine, Blinken without naming any country, said there were questions and concerns from Russian allies about President Putin's invasion.

"Even a number of nations that maintain close ties with Moscow have said publicly that they have serious questions and concerns about President Putin's ongoing invasion," Secretary Blinken said.

As the meeting began, there were already signs of a charged atmosphere around the council's famous horseshoe-shaped table. It was the first direct encounter between Secretary Blinken, Russian Foreign Minister Sergey Lavrov and Ukraine's Dmytro Kuleba, who attended the meeting as his country was the subject of discussion.

Blinken, throughout his address, called on every UNSC member to "send a clear message [to Russia] that these reckless nuclear threats must stop immediately.""What is striking is the remarkable unity among member states when it comes to the (Russia-Ukraine) war. Leaders from countries developing and developed, big and small, north and south have spoken in UNGA to end the war," he said.

"Leaders from various countries spoke about need to end war. Rather than pulling troops back, Russian President Putin decided to escalate tensions by threat of nuclear weapons. He's adding fuel to fire.We won't allow Putin to get away with it," he added.

Indian Prime Minister Narendra Modi's remark to Putin last week that this is not the era of war have been welcomed by the United States.

Just before Blinken's address, a senior administration official told reporters countries including India are speaking out against Russia. "You are seeing increasing signs of countries that did abstain, to include countries like India speaking out in a different way, including directly in front of Putin," the official added.

US National Security Adviser Jake Sullivan said the remarks by PM Modi are a "statement of principle on behalf of what he believes is right and just". He said the remarks are "very much welcomed by the United States and for the Indian leadership, which has longstanding relationships in Moscow, from the very top all the way through the Russian government, to continue to reinforce that message that now is the time for the war to end."Leaders from Turkey, China, and India, all of whom have relatively positive relations with Russian President Vladimir Putin, have publicly kept their distance over the war recently, a development the White House called "noteworthy."John Kirby, Coordinator for Strategic Communications at the National Security Council in the White House, said, "I think what you heard in Uzbekistan by both the leaders of China and in India are indicative of the fact that Mr Putin doesn't have a whole lot of sympathetic ears out there to what he's been doing in Ukraine."Even French President Emmanuel Macron, during his address at the United Nations General Assembly on Tuesday, recalled the remarks pointing out the impact of wars on international community. He said, "Narendra Modi, Prime Minister of India, was right when he said the time is not for war. It is not for revenge against the West....It is the time for a collective time for our sovereign equal states to cope together with challenges we face." (ANI)

US claims American-JetBlue alliance is anti-competitive

BOSTON, Massachusetts: The U.S. Justice Department has asked a Boston judge to force American Airlines and JetBlue Airways to scrap ...

Another delay for US moon rocket as hurricane approaches Florida

CAPE CANAVERAL, Florida: NASA has announced that it will roll its giant moon rocket, the Space Launch System, off its ...

MIAMI, Florida: As Hurricane Ian crashes across the Caribbean, bringing high winds and torrential rains, Florida residents are scrambling to ...

KRAKOW, Poland: Organizers said an April Roger Waters concert planned in Krakow, Poland, has been canceled due to Waters' support ...

TEL AVIV, Israel - The Israeli army has approved using drones to carry out assassinations in the West Bank.The extraordinary ...

Government of India warns students in Canada about hate crimes

NEW DELHI, India: The Indian government has advised students and other nationals in Canada to be wary of "incidents of ...

TOKYO, Japan: As Japanese firms are coping with a global economic slowdown and high energy and raw material costs exacerbated ...

WASHINGTON D.C.: The Biden Administration and the Australian government are in discussions regarding the U.S. building the island nation's first ...