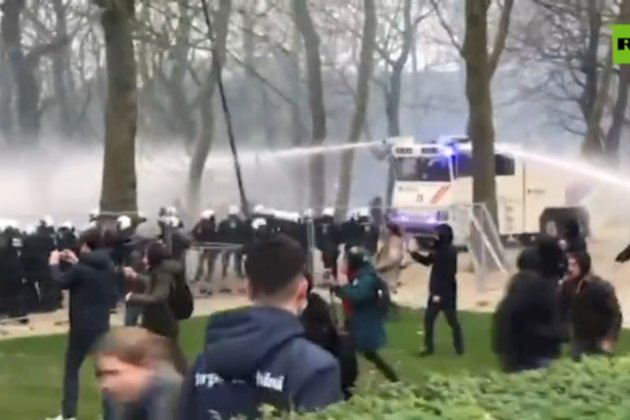 Chaotic scenes unfolded on the streets of the Belgian capital, Brussels, on Sunday, as thousands of protesters joined a mass march against Covid-19 health passes and other restrictions introduced by European governments in the name of combating the pandemic.

Videos captured by RT France journalist Charles Baudry showed white-helmeted police officers in riot gear blocking streets with barricades and deploying water cannons to disperse the crowds. All the while, black-clad masked protesters were pelting the police with various projectiles, including planks they had apparently acquired from demolishing a cafe's terrace.

The protesters could be heard whooping and cheering as they threw plastic chairs at the police, who sought to disperse them with tear gas. Officers armed with shields and batons moved in tight formation to push the crowds away from a city park, RT videos showed.

In one particularly violent incident, demonstrators were seen attacking the entrance to the European External Action Service headquarters. They attempted to smash the door, leaving visible marks on its reinforced glass, then used planks as improvised spears as a group of police officers remained inside and attempted to drive them away with tear gas.

The mass protest followed anti-lockdown demonstrations in other European cities on Saturday. It was said to be organized by more than 600 local associations from all over Europe, as well as by some national branches of World Wide Demonstration and Europeans United.

The organizers claimed they were not against Covid-19 measures as such, but were defending freedom, democracy and human rights, while protesting against the "undemocratic way" governments in Europe chose to introduce restrictions.

"We want to point out that a large and ever-growing group of people no longer feel that they are heard in the social debate," Tom Meert, the head of Europeans United, told VRT broadcaster.

According to AFP, Sunday's anti-lockdown march in Brussels was larger than ever before. Dutch, Polish and Romanian flags were seen among the packed crowd that filled the streets of the Belgian capital, which also houses the EU's governing bodies.

A similar protest in early January resulted in dozens of arrests, even though it was described as "largely peaceful" by the media at the time. Police had not revealed information about any detentions linked to Sunday's protest at the time of writing. There have also been no reports about the number of injuries.

The protest came as Belgium reported a spike in new Covid-19 infections that reached more than 60,000 a day last week and prompted the authorities to describe it as a "tsunami."