China and US Clash Over 'Belt and Road' in Afghan Resolution 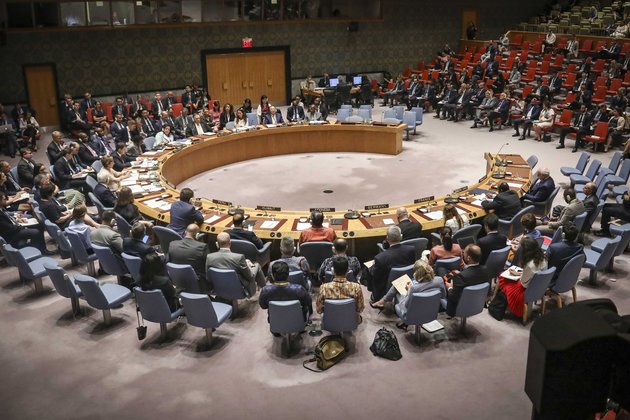 UNITED NATIONS - China and Russia clashed with the U.S. and other Security Council members Monday over China's insistence on including a reference to Beijing's $1 trillion "belt and road" global infrastructure program in a resolution on the U.N. political mission in Afghanistan.

The mission's six-month mandate expires Tuesday and council members met behind closed doors for over 2 1/2 hours Monday, unable to agree on a text because of China's demand.

Russian Ambassador Vassily Nebenzia, the current council president, told reporters afterward that diplomats were working on a new text and "we're in the process of reaching a compromise."

He said the council would meet again late Tuesday morning in hopes of reaching unanimous agreement.

This is the second time in six months that the resolution to keep the U.N. political mission in Afghanistan operating has become embroiled in controversy over "belt and road" language.

Resolutions extending the mandate of the Afghan mission for a year in 2016, 2017 and 2018 had language welcoming and urging further efforts to strengthen regional economic cooperation involving Afghanistan, including through the huge "belt and road" initiative to link China to other parts of Asia as well as Europe and Africa.

But in March, when the mandate renewal came up, U.S. Deputy Ambassador Jonathan Cohen objected, saying Beijing was insisting on making the resolution "about Chinese national political priorities rather than the people of Afghanistan."

He said the Trump administration opposed China's demand "that the resolution highlight its belt and road initiative, despite its tenuous ties to Afghanistan and known problems with corruption, debt distress, environmental damage, and lack of transparency."

China's deputy ambassador, Wu Haitao, countered at the time that one council member - almost certainly referring to the U.S. - "poisoned the atmosphere." He said the "belt and road" initiative was "conducive to Afghanistan's reconstruction and economic development," saying that since it was launched six years ago 123 countries and 29 international organizations had signed agreements with China on joint development programs.

The result of the standoff was that instead of a one-year mandate renewal for the Afghan mission, the mandate was renewed in March for just six months in a simple text, without any substance.

Ahead of this month's mandate expiration, Germany and Indonesia drafted a substantive resolution that would extend the mandate for a year. It focused on U.N. support for an Afghan-led and Afghan-controlled peace process, U.N. assistance in the Sept. 28 presidential election and strong backing for Afghan security forces ``in their fight against terrorism.'' It made no reference to China's "belt and road" initiative.

So China and close ally Russia circulated a rival draft resolution that removes all the substantive language and simply extends the mission for a year.

Council diplomats said after Monday's meeting that China and Russia would likely veto the German-Indonesian draft resolution, and the China-Russia draft would fail to get the required nine "yes" votes. So diplomats were meeting Monday night to draft a new resolution.

South Africa's U.N. ambassador, Jerry Matjila, said, "I think there is a chance of a compromise."